Here are more of the best contributed images to Abandoned in Virginia on Facebook, culled from the flood of images that poured in during the page’s second week online.

My next blog post will feature a collection of my own photos posted to the page last year.

Many thanks to all of the contributors for these great photographs!

I have driven by this stately old home near Bedford countless times over the past several decades and always found it fascinating.  It’s probably the oldest house along Rt. 460 between Lynchburg and Roanoke, and back in the 1980’s, I would frequently see its apparent lone occupant sitting on the side porch.   After many years, I never saw the old man again, and it soon became obvious that the house was abandoned.

In November of 2012, I finally paid a visit to the house and shot several photos, including of the family cemetery around back.  I also at the time learned through Facebook friend and local history “detective” W. Scott Smith that this house was built in 1826 by Dr. Thomas Mitchell.   It turns out that the old man on the side porch was Dr Mitchell’s descendant, a Mr. Grayson Mitchell, who passed away in 1994, and whose grave is among those in the family cemetery.      (Correction 1/9/15:   The Thomas and Ann Mitchell buried in the family cemetery on the property are actually children of Dr. Thomas Mitchell’s son John Saunders Mitchell)

Dr. Mitchell’s office also sat on the property, in a small building along the roadside in the right corner of the front yard, which has now collapsed.    Demolished structures included a separate kitchen, slave/servant quarters, an ice house and a stable.  A small smokehouse still stands in the back yard. 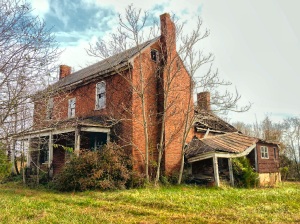 From a DHR submission (which also cites Bedford Villages Lost and Found, Vol. I):
“Oakland was built in 1826 by Dr. Thomas Mitchell for his bride, Ann Dandridge Saunders, daughter of Col. David Saunders of ‘Pleasant Grove’.  The doctors’ office was a small one-story, one-room, side-gable frame building with beaded weatherboarding, brick foundation, and brick exterior end chimney. It stood in the ‘right corner of the front yard’.Dr. Mitchell received his medical degree from the University of Pennsylvania and began practice in 1820. His son, John Saunders Mitchell also became a physician, graduating from the University of Pennsylvania in 1852, and father and son practiced medicine during the Civil War. “Mrs. Mitchell had the most beautiful flower garden in Bedford County.” … Reportedly, all brick used in the construction of the house and buildings was made on the place.”

In 1974, the house lost a considerable amount of its front yard with the 4-lane expansion of Rt. 460. 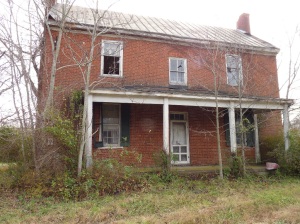 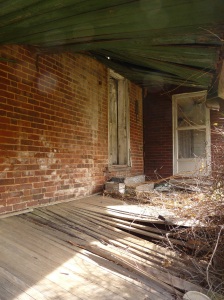 Sadly, the historic home was destroyed by fire on New Year’s Eve of 2012, and it sits in ruins along the highway today.

I have culled and included in this post the best contributed images which I saved last March from the first week of Abandoned in Virginia on Facebook.   If you recognize the location on one of the unidentified photos, please comment and indicate the county or town…but please do not identify the specific location of abandoned old homes.

Thank you all again.   My next blog post will focus on a classic house I visited and photographed for the page.

from Wikipedia:
“Rosewell Plantation in Gloucester County, Virginia, was for more than 100 years the home of a branch of the Page family, one of the First Families of Virginia. Begun in 1725, the Flemish bond brick Rosewell mansion overlooking the York River was one of the most elaborate homes in the American colonies. In Mansions of America, the architectural historian Thomas Tileston Waterman described the plantation house as “the largest and finest of American houses of the colonial period.”[3] Through much of the 18th century and 19th centuries, and during the American Civil War, Rosewell plantation hosted the area’s most elaborate formal balls and celebrations. The home burned in 1916.”

This store along Norfolk Southern’s Shenandoah Valley Line was the location of the famous O. Winston Link photograph, “Sometimes the Electricity Fails.” Prior to ownership by Mr. &amp; Mrs. Edgar Austin, the store was owned by Gray D. Secrist, whose name has become faintly visible in the weathered paint on the front of the building.

Regarding the house above:

“The Parker House was the home of Thomas D. and Cornelia Spratley Parker, conveyed to them by her father, Stith Spratley, in 1890. Mr. Parker was a merchant, Dendron’s first Postmaster, and Vice President of the Bank of Dendron. He was installed by the Surry Lumber Company as a member of the Town Council established in 1896. The Parker House is an imposing two-story structure with large bay windows on both floors.

The house now belongs to a local farmer who owns the house and fields to the left and behind the structure. The Parker house is the most noticeable house in Dendron. We thought that there was a chance that the farmer would donate the house to the Historical Society and we would try to find a grant to save it. The house has not had anyone living in it for the past 15 to 20 years. The house has three bay windows. It also has a gutter system that is built into the eves which were not well maintained and have been leaking since the time when it was abandoned. We had a land survey done of the house lot but the owner wanted to be assured that we would have the work done to the house in two years. We just spent nine years repairing a boxcar that ran on the railroad that once was in Dendron so we could not make the guarantee that we could have the work done at some specific time. Thus the house sits and rots even more.”

from the web:
“Tax records indicate the church building was built in 1850 and the Methodist Church records indicate that the congregation was “established in 1881.” Fleetwood’s steeple is a landmark and lies directly across the highway from the Brandy Station Battlefield and two doors down from the Historic Graffiti House containing the signatures and artwork of both the Confederate and Union armies.”

Immediately after Abandoned in Virginia was published on Facebook last March, contributions began to pour in.  Here are some highlights of the photos submitted by others to the page on day one, March 3, 2014.    If you recognize the location of any of the unidentified settings, feel free to comment with the city or county…but please do not identify the specific location of abandoned old homes.

As you can see, the page immediately began to flourish with a variety of excellent photographs of a variety of structures around the state.   I remain extremely grateful for these contributions and for the ongoing support of the page.

about the photo and house above:
“This is an abandoned house located in Callaghan, Virginia. My horror photography company, GOREgeous, was granted access to use this home for promotional photos by the caretaker”

About the photo above:

“It’s the Blue Ridge train tunnel built in the 1850’s and closed in 1944. It is 4100 ft. long and currently walled off in the middle. The localities are trying to re-open & restore it to be used as a hiking/biking trail. It’s only a few miles from the Blue Ridge Parkway.”

About the above house:
“This house was built in the early 1900’s, and was demolished to make room for a parking lot the year before last. I believe they called it the Christian Home after the gentleman (Dr. Christian) who lived there from the mid-twenties, until his death in 1955. Since sometime around the early 2000’s, the property has been in the possession of Liberty Baptist Church, and had been sitting in disrepair for some years before the church finally decided to tear it down.
I’m sure their reasons for demolishing this building were sound, but I can’t help but wish they had chosen to preserve such a beautiful piece of the town’s history!”

about the above building:
“Main Street Meherrin is the county line for Lunenburg and Prince Edward counties. This building on the Prince Edward side of the road more recently was a church, prior to that a pool hall (I believe), but originally was a general store (thanks Linda Gee Nunnally). Photo taken last November.” 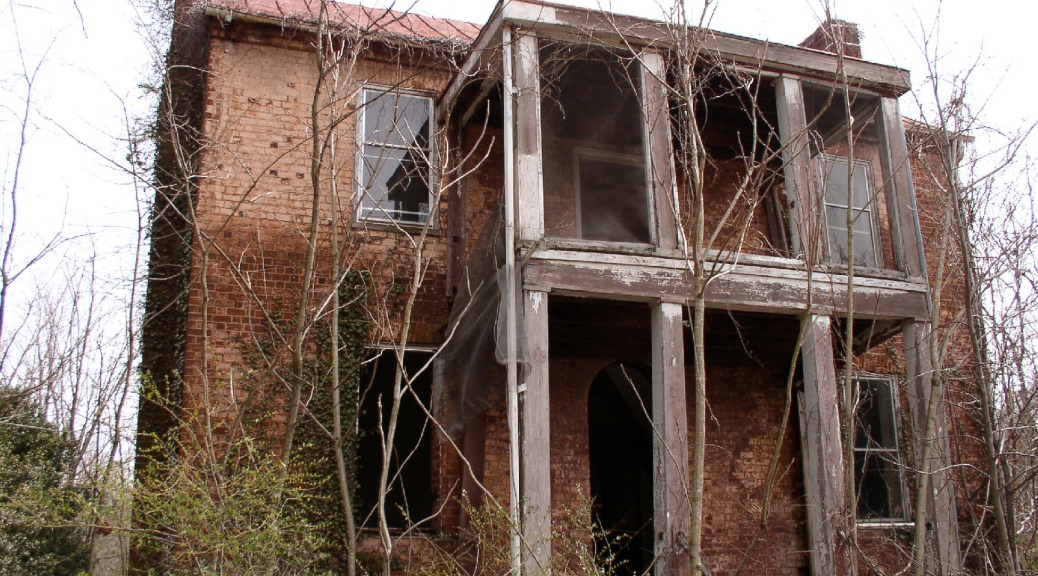 After having passed by this eerie abandoned house for many years, I paid a visit to the location one afternoon in March of 2008 with camera in hand and shot several photos, not realizing that such outings would become a habit for me, and that five years later, I would launch a page devoted to abandoned structures in Virginia…a page that would immediately go viral (see below)…

Built circa 1826, and sold to the Tyler family in the mid-1880’s.   Descendants of the Tylers owned the house and its surrounding 250 acres for generations, until at least the 1960s.   (info from the Amherst New Era Progress).

Abandoned in Virginia on Facebook was launched on March 3, 2014, and the page took off like wildfire.  Two days later, WNBC in Richmond posted this story:

Since its launch, thousands have posted their own photos to the page, which now has over 126,000 Likes.   Here on this blog and as time permits, I will feature some of my best personal photos posted on the Facebook page, and perhaps some of the best photos contributed by others.

Below are more photos of the house that “started it all”…the Tyler House:

“Was a beautiful place at one time. Went in it for yrs. Mr Steven Tyler lived there, started in 1825 finish 1828. The English boxwoods came from England. It once was known as Duckbill Plantation, land was pat.by Chas Clark 1761, 1804- to Mundy, house built by James Lampkin , several owners last was Mrs Slaughter to Tyler’s . 250’s acres . Named Duckbill because of the creek behind the house. Tyler’s one room school house was where Dollar store is [today], another 2 room school was on the right of the house w/ a slate roof, a slave house back of the main house, even a early kitchen in basement old fireplace and a dumbwaiter.”  – from Facebook user “Tad Pole”

This site is devoted to the aesthetic appreciation of abandoned and decaying old homes and other buildings and such, and is the official companion web site to the wildly popular Abandoned in Virginia page on Facebook.